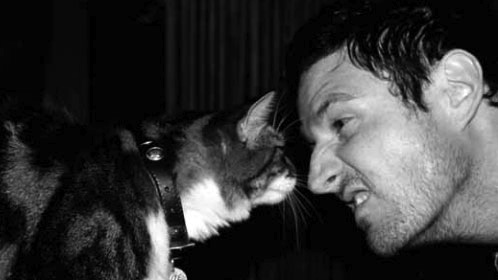 Comedian Wil Anderson is a proud “cat person” and has something to say about the whole men and cats issue. According to Wil, “In this country, if you are a man and you say "I like cats!" what people actually hear is "I have my period, now get me a hot water bottle and a block of chocolate because I want to watch Grey’s Anatomy.”

“There is no line in the VB ad that says, You can get it stroking your cat’s tummy until he goes meow, matter of fact, I’ve got it now!”

Wil has three adopted cats – Tip, Diego and Ziggy – and says that the adoption process was easy.

“I think the thing people need to know is how easy it is because of organisations like PetRescue. In fact, if Angelina Jolie could adopt kids this easily she would have 100 by now.

“Going through an organisation like PetRescue means you can be confident your pet will be healthy and have all its shots and their rescue group members only match you with pets that suit your needs.”

“They are all adopted cats. Well, I say adopted. I think they realise that we are not their real parents.

“The eldest is Tip. He is named that because we got him as a six-week-old kitten at a rescue that was at the rubbish tip near Bowral. We wanted to remind him that, even though he was enjoying a spoiled city life, he was still from the wrong side of the tracks. You know, like Ryan from The OC.

“Then there is Diego the Burmese cat. He was in an accident and going to be put down when we got him at about eight weeks old. He walks with a limp, although he can still get up some speed when he gets going. Every time you watch him get up, it's like the final scene of The Usual Suspects.

“And finally, Ziggy, who is white and had been hit by a car. He was tiny when we got him and he just likes to eat. Everything. Especially if it is on our plate. He is the only cat who would go on MasterChef. He would only eat a mouse if he got to marinate, stuff and slow-roast it first.”

Wil says he loves being a cat owner and knows that it is good for him, but they currently have no plans to add more cats to their household. “We are a little worried that if we take in too many more animals the neighbours will think we are building an ark in the backyard!”

Loved reading about Wil the cool cat man? Then you’ll love our monthly newsletters. Why not subscribe today!