Lest we forget the life-saving power of unconditional love

Lest we forget the life-saving power of unconditional love

Homeless boy Buddy went from pound dog to proud service dog in just six months and turned the life of a veteran from Iraq and Afghanistan around. Proof that the unconditional love of a dog is far too precious to be put on death row at the pound.

Buddy entered the pound system with no microchip and no recorded history. And as a large two-year-old bull Arab x boxer, he had very little chance of being adopted and surviving the pound system. He could have easily become the ‘one in four dogs’ that are killed in Australia’s pounds every week.

Fortunately, Dog Rescue Newcastle rescued timid Buddy, placed him in foster care and gave him his own PetRescue page to promote his handsome looks and friendly and affectionate nature.

It was his PetRescue profile and happy-go-lucky photo that caught the eyes of the Dogs for Diggers team - an innovative program developed at Bathurst Correctional Centre to rehabilitate and train rescue dogs as ‘Service Dogs’ for returned soldiers suffering from Post Traumatic Stress Disorder (PTSD).

Committed staff and inmates involved with the ‘Dogs for Diggers’ Program at Bathurst have trained more than 30 dogs for the ‘Young Diggers’ Dog Squad since [2011], including Buddy, who was adopted into the program on Anzac Day in April 2013.

“Buddy became a star. He learned quickly and excelled at everything. He loved going out in public and was great with people of all ages. He regularly visited schools for special needs children, Riding for the Disabled and nursing homes,” says Dogs for Diggers Program Manager, Louise Kelly. 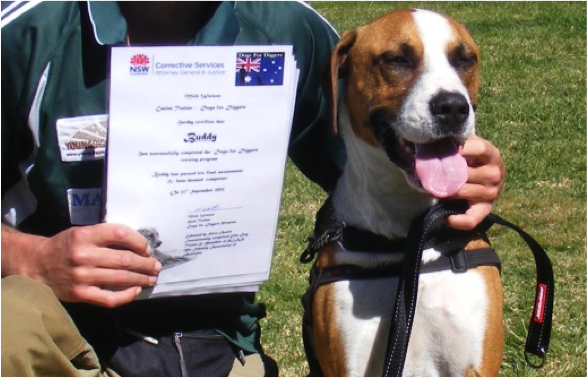 Buddy graduated after six months and was donated to a veteran from Iraq and Afghanistan - Reece Maloney. Reece had suffered with Post Traumatic Stress Disorder (PTSD) since 2008, after returning from a deployment to Iraq.

“At first, I didn’t know what I was dealing with. But the job distracted me and the support of my mates kept me going,” says Reece. However, when Reece began to feel isolated, following a move to Central Western NSW, he reached out to the Young Diggers for help and Buddy answered his call.

“When Reece met Buddy, the bond was almost immediate,” says Louise. “Over and over again we are amazed to watch our dogs go straight to their veteran, the dogs always seem to single out the right person from any group of people. It is as if they know they are meant to help them, they seem to know these people are unwell and they need some special attention. It is incredible to see and is something we could never have predicted – the dogs simply see and understand, on some level, what an average person cannot.” 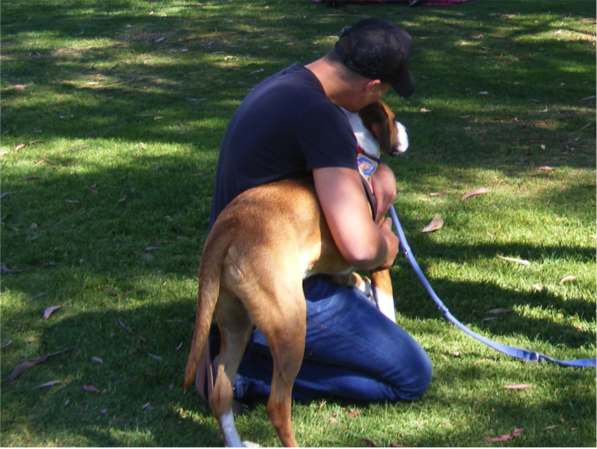 Above – Reece after meeting Buddy

Fast forward 18 months, and Buddy has become a celebrity in Reece’s hometown.

“Everybody knows him!” laughs veteran Reece. “He knows a lot of people in town, and as soon as he recognises them he wants to go over and say hello.  People are always calling out to him in the street. That’s made me a lot more sociable, and it’s helped my recovery enormously.

“Before, I wasn’t able to go anywhere without one or two of my mates. Now, with Buddy by my side, going out in public is not such a big thing anymore. I have the confidence to be independent again.

“My mates also think Buddy has been a great help,” says Reece. “They all treat him like one of the boys. He hangs around with the group and gets on with everyone. He has gone from a dog no-one wanted and now everyone loves him.”

Buddy was even invited to the wedding of one of Reece’s good friends. He wore his own ‘tux’ for the occasion. 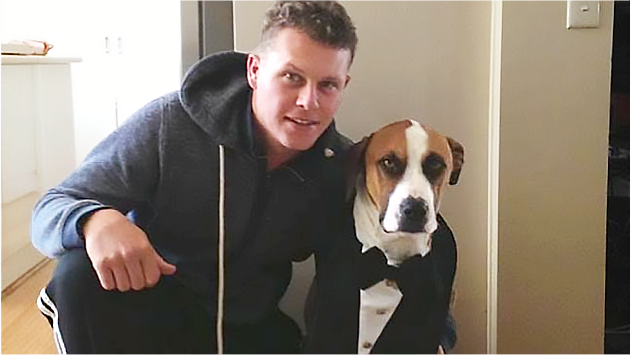 Above – Buddy gets dressed up for the wedding

Reece’s family have noticed a huge difference in him too, and realise how much Buddy has helped with the emotional stresses he was dealing with.

“Always having him there is a real comfort. He gives me focus, knowing that I have to protect and look after him. And when I’m stressed out, he helps me. I watch his body language and try to model my behaviour to match his. It’s kinda like he’s saying - chill out bro, you’re safe so calm down.”

When Reece’s grandfather was in hospital, Buddy always went along too and would regularly visit other patients while he was there. “Everyone looked forward to Buddy’s visits,” smiles Reece.

“Buddy and I also visit my elderly Aunt, who is in her 90s and lives in her own home by herself. She loves seeing Buddy - he lifts her spirits so much.”

Buddy has become such an important member of the whole family - Reece’s mum loves him too, affectionately saying he’s just like a big kid.

Buddy goes to the gym with Reece regularly and has become the baby sitter for parents who bring their children along. “The kids just love him, and he loves the kids very much,” says Reece. “The kids in the main street and shopping centre always come up to him for cuddles and pats.”

Reece and his mates agree, “Rescue dogs have such a lot of character. It is the experiences in life that make them who they are, and Buddy is definitely his own person.”

Buddy has his own couch at home, sometimes he sleeps on Reece’s bed, if Reece is having a bad time of it.

“He will sleep in the crook of my arm and put his head on my chest, but if he decides to sleep on his couch he will come and check on me at least four times throughout the night.  I hear his claws on the floorboards, then he will stand in the doorway until I call out and say ‘I’m OK Buddy’ and he will go back to sleep.”

Reece and other diggers like him have fought bravely for all Australians, but have returned with physical and emotional injuries that make it difficult for them to adjust to civilian life. The Dogs for Diggers dogs are a constant companion offering their veteran unconditional love and support – they are a loyal friend who is always there for them.  Who could deserve this more than our diggers.

Want to know more about Dogs for Diggers?

If you are a rescue group, and would like to support the program by supplying rescue dogs for training, please contact PetRescue via info@petrescue.org.au

If you are a veteran or dog trainer who would like to find out more about the program, please visit the Young Diggers website.