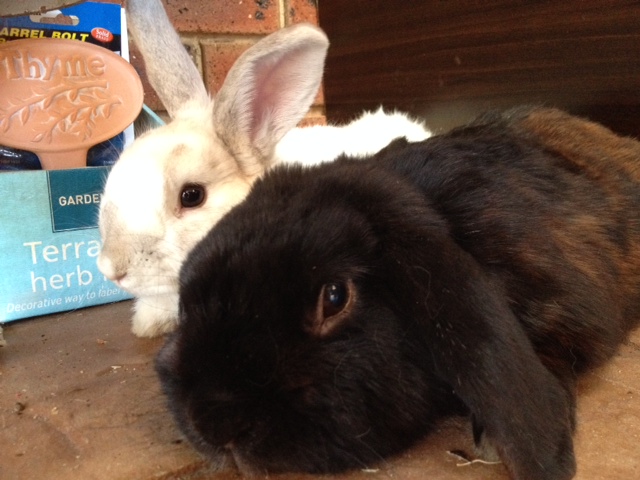 Benjamin isn't letting old age slow him down; he's got a new home, a new girlfriend and a great new family to live with. When it comes to bunnies, Benji knows that 12 is actually the new 2.

Thanks to his adoptive mother Rebecca, Benji is proving how those cherished autumn years can be the best time of your life.

"Benjamin, is a 12-year-old black Lop rabbit. At the time I volunteered at GAWS in Geelong specifically to work with the rabbits;  after the vet checked him over, I decided I would foster Benjamin.

"He was too old to desex, as it would be risky to put him under anaesthetic, so I was cautious to bring him near my first bunny Creme who was only 7 months old at the time, spayed though. But without a hitch they loved each other from the off.

"Within the first week I thought something was wrong, he often bumped into things and often was startled by touch. Off to the vet I went, conveniently close to home. They discovered he was blind. He had retinal atrophy and had lost his vision some time ago. Poor man.

"After three months in foster he was accustomed to the dogs, cats and birds. He was especially fond of the Labrador puppy, Buddy who loved to clean him up. He loved life and chasing Creme around the yard. When it came time for me to move I fretted over where he would go. I'd grown fond of him and so had Creme. It was final. He was with me, for good.

"Benjamin, Benji as he is affectionally called, runs with Creme everywhere. They do fight occasionally, they can't decide who's top dog! But take them apart and they get very upset. They're an odd couple, but they work. I had only gotten my first rabbit a couple months before Benjamin and his love for life deepened my love for the animals. He's a happy bunny, spoilt and adored by all.

"I hope people think of adopting older pets as they commonly are overlooked for babies. They are the golden years, you get the pleasure of providing a loving home and can still have many years left. Age is just a number as Benji has shown. He hops around and followed Creme like he was still just a year old!"

If reading this Happy Tail gave you a warm and fuzzy feeling, you can instantly boost that natural high by making a donation to help PetRescue save the lives of more than 7,000 rescue pets every month!