The little white lion with a big personality 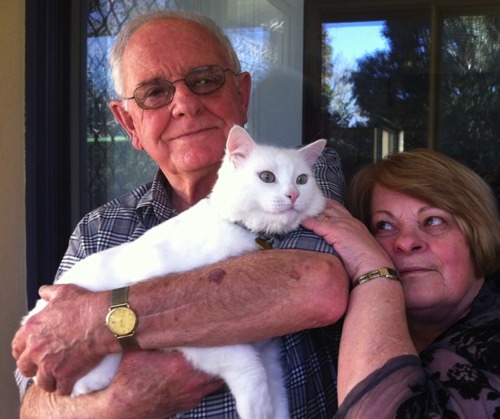 They’d lost their beloved dog to cancer the year before and were missing the animal connection in their lives, so daughter Rachael had started secretly searching the pages of PetRescue for a suitable new friend.

“Since Bunny the Manx entered my life as an abandoned stray, the whole family had become rather fascinated by the Manx breed, including Mum and Dad”, said Rachel. “So when I spotted the little white rumpy Manx listed by Helping Paw in Sydney, I suggested to my Dad that we go meet him, and if he was suitable, 'Ivor' (as he was listed) would be my Dad's birthday present from me as it was just around the corner in October 2009.

Doing our research, we came to understand that white cats are over represented in pounds because of the assumption they are deaf ('Ivor' was not) or the 'hassle' of keeping them out of the sun as they are prone to skin cancer. In addition to that, some people don't understand or recognise a Manx and they think the tail has been lost or that its a genetic fault...rather than a feature of the breed...so sometimes Manx end up in shelters for that reason. For all those reasons Ivor had been found on the streets and had ended up on death row at the local pound, before being saved by Helping Paw.

As soon as my dad met 'Ivor' it was like soulmates meeting for the first time. The fluffy white cat jumped down from his open cage, ran over to my dad, jumped up on to his lap and began snuggling into his neck. I am sure 'Ivor' knew exactly who he had to impress that day! We took him back to my parent's house that afternoon on trial. My mother was equally taken with him, and he with her, although she insisted on changing his name (she didn't like Ivor). Thats how he became Kimba, 'the white lion', named after the cartoon we used to watch as kids.

Kimba has never looked back. He quickly trained my parents as to just how he liked things. And he is treated like the little prince he knows he was born to be. He is a very affectionate boy with a loud, attention demanding meow. Most nights he snuggles in between them while they watch TV. He's a real people person (cat) so is great company for them. He is not remotely shy and kisses up to anyone who arrives....except for my dog Missy when we vist every fortnight or so. Kimba is very jealous of any attention Missy gets especially from HIS people.

Having always been 'dog' people, Kimba is the perfect cat for my parents. He is super intelligent and listens to every word being said. He follows a number of commands (as long as it suits him) and with his muscular shape and strong determined gait, he can make the floorboards shake as he makes his way to where he wants to go. He's very chatty and will give you a piece of his mind if you don't clean his kitty litter the minute he's done with it. He's fastidiously clean.

Because he has a fluffy coat, to keep it in control, he is 'shorn' 3 or 4 times a year. Unlike most cats, Kimba actually enjoys getting his hair done. No need for sedatives...he's too busy loving up to the groomer! Some people say he looks just like a little lamb! And obviously being white, he is kept indoors 99% of the time, with the odd supervised trip outside at dusk only where he loves to chase garden lizards and smell the flowers.

He's such a strong personality and so loving, its hard to imagine he was dumped on the streets, ending up on death row. But now its a very happy ending for 'Ivor' who became Kimba, and 3 years later is now a much loved and much spoiled little prince. 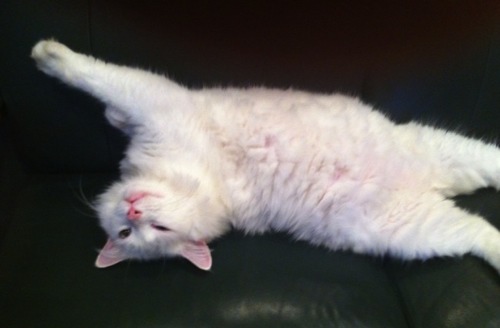