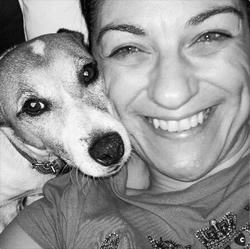 There’s no doubt that pet adoption is one of those big, life-enhancing moves. But what's even more uplifting is when your exciting little addition has the power to transform every other aspect of your life as well – in ways you never dreamed of. That's exactly what happened when Yiota met Rusty.

As busy as Yiota’s life was, working as a legal secretary, she keenly felt the absence of her dearly departed Jack Russell terriers, Hugo and Becky. After years of mutual love and devotion, the pair sadly died within a year and a half of each other. Yiota’s home echoed with pet emptiness. A dog lover all her life, she had a definite plan to adopt again.

“Having Hugo and Becky as my companions for 15 years was wonderful, and I felt lost without them. I needed to fill my home with the unconditional love of a dog again. My first option was always going to be adoption," says Yiota. "Having owned Jack Russells before, I knew the breed and wanted to adopt another one. I loved the fact that they are a big dog in a little body and have lots of spunk! I love their feisty personality.”

One look at Rusty's PetRescue profile, and Yiota was captivated. And when they met, face to face, it was clear there was nothing rusty about his charming skills. “When I walked into the room where Rusty was waiting for me, I knew I had to have him. He was such a sweetie and his lovely brown eyes just melted my heart. He was gorgeous! I wanted to keep his name but my nickname for him is Crusty Rusty.”

Taking Rusty home and settling him in was a cinch. He was an instant hit with Yiota’s family too. “I let Rusty get familiar with his new home before taking him out on his first walk with me. And in the evening, my immediate family came over to meet him. "He was very affectionate, nudging hands for pats. Everyone just fell in love with him. I felt like my life was whole again. I think Rusty saved me instead of the other way around!”

Yiota took time off work for a few days to get Rusty used to his new home and prepared for being left alone when she had to go to work. "He was such a good boy. I felt like I had won the jackpot with him and couldn't understand how anybody could give him up. The only downside was having to go to work and not be with him.”

A responsible dog owner, Yiota saw to it that Rusty went to training classes, to learn good behavioral skills and receive the intellectual stimulation dogs crave. “Rusty had no training when I adopted him. However, he has breezed through obedience training and knows a few tricks. He can wave and play dead. He loves training and his eyes glaze over after a good ball playing session.”

But Rusty’s greatest talent was yet to be revealed. Little by little, he helped show Yiota where her true path lay, career-wise.

“Rusty is such a clever little guy, and giving him a second chance in life has actually done the same for me too! His boundless enthusiasm for learning has inspired me to make a career change to become a professional dog trainer. I have started a Dog Behavior and Training Course. I even met my partner – his dog trainer – thanks to Rusty!”

Yiota believes adoption is a win-win situation. “You feel good, and that you have really made a difference to an animal's life. I encourage anybody looking for a pet to make adoption their first choice."

Help other rescue dogs like Rusty by donating to our cause. Just $10 helps us match one of our pets with their new family!