Remember Emma, our featured foster mum last month? Well, we decided to give her a pleasant surprise by finding two of her favourite foster pups and sharing their Happy Tails. Pennie, the Kelpie cross that Emma so wanted to keep, and Poppy, the singing and talking Ridgeback cross (below). 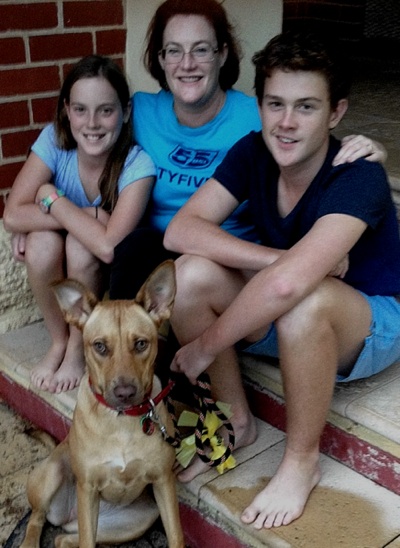 2011 was a year of tragic loss for the Shearns of Perth. Their cat passed away, but at the age of 22 years, he’d had a good innings. Within a month, the family was grieving the loss of their dog too. He had pancreatic cancer and died at the age of just five and a half. Then at Christmas, they adopted a puppy, which quickly grew sick and had to be put down after several operations failed to rectify a congenital bladder defect.

“It was awful. We were totally distraught,” Julianna exclaimed. “But after a few months, I couldn’t handle it any longer. I needed to have another animal in our lives.”

With the help of her children, Julianna searched the dogs for adoption at Shenton Dogs’ Home Refuge via the PetRescue website and visited the refuge a few times.

“On our third visit, the kids spotted Dandy, a beautiful five-month ridgeback x staffy x kelpie,” recalled Julianna. “She had extremely big pointy ears, an alert and intelligent look in her eyes and very gentle nature.”

Being such a striking young pup, she’d already caught the attention of 10 other families keen to give her a loving home. But because Julianna had adopted from Shenton several times before, and had already completed the paperwork, the Shearns were top contenders for adopting little Dandy.

“Dandy was just finishing a course of treatment for a skin condition, but as our previous dog had suffered with skin allergies, we were fully prepared to take on that minor challenge,” explained Julianna.

“The condition quickly cleared up, and she has a stunning coat now.”

“I always wanted my children to grow up with a dog in their lives, and Poppy has just been outstanding from day one. She’s just the best thing we ever had,” smiled Julianna.

“She’s very loving, but she also loves to play hard. My daughter has got Poppy playing soccer in the backyard – she uses her front paws very well on the ball.”

Poppy has also quickly learned a trick the Shearns have taught all their pets to do – talk and sing.

“Poppy loves to sing and speak to me. She demands her food with a woof and a bit of a howl. It’s hilarious,” laughed Julianna.

“We recently took her in to be boarded at Shenton while we went to Rottnest. She didn’t talk or sing for a couple of days when we brought her home. Perhaps she had learnt to be a dog again. Or maybe she was just punishing me for not taking her with us!”

It’s now almost a year since Poppy brought happiness and unconditional love to the Shearn household. She turned one this month. And Julianna can’t thank Emma, Poppy’s foster carer, enough.

“Poppy settled in very quickly at our home. She is the light of our life.”