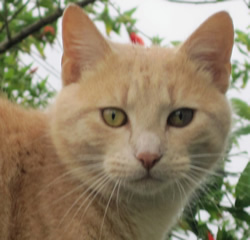 Mel encountered her first wild cat, Snaps, in the car park of her local shopping centre about two years ago. At first, she thought he was just a dumped cat. But knowing the kill rate in pounds, she didn’t want to just trap him and hand him into the local authorities. Deciding to care for the whole wild cat colony, rather than ‘catch and kill’, was the first of many acts of kindness that have resulted in great success for the cats and the community – reducing the population from over 100 cats to around 13 cats today.

A friendly neighbour who has lived in the area for 20 years told Mel there had been a colony of wild cats living in the drains between the shopping centre and bushland for a long time, and nobody seemed to be doing anything about it.

“My first thought when I saw Snaps was that I wanted to protect the wildlife in the area,” says Mel. “I didn’t really know what I was doing, or understand what I was signing up for when I decided to do something about the cat colony. But I thought, heck, if I feed these guys, they are less likely to feed on the wildlife in the area and I might get to know them in the process.”

Mel’s first port of call was a rescuer, who has many years of experience with wildcat colonies.

“I’m very grateful for her advice,” Mel says with a smile. “She told me not to go marching in there and try to trap the cats for desexing straight away. She said you need to let them get to know and trust you first by spending some time feeding them. And it makes perfect sense that a trapped and frightened cat is going to be a lot more difficult to tame. While a trusting, friendly cat is going to be much easier to rehome. I learned that the best care you can give wild cats is to be respectful and polite with the way you approach them. If they aren't in immediate danger, start feeding them, take your time and allow them to come to you. The rest of it I just picked up along the way.”

When Mel returned to the car park late in the evening with a little food, she discovered Snaps the ginger cat had two girlfriends, part of a community of around 100 wild cats. At first, she wasn’t able to get within more than 50 metres of them, or even look at them without scaring them.

Every night, Mel fed the cats and sat with her back to the colony while they ate. She edged a little closer, day by day, and after a few months Snaps was happy for Mel to rest her hand on his bowl while he was eating.

“About three or four months after I started feeding the colony, I was crouched down filling the bowls and felt Snaps brush up against my bottom. I thought I was imagining it at first. But Snaps had decided it was time to come and touch me. After that, it wasn’t long before I could touch him and pick him up. Most nights he would climb up on to my lap. It was quite amazing how quickly he came around. He’s never once scratched or injured me. And once Snaps was OK with me, he kind of did a lot of the diplomacy work for me to help me get accepted by the colony.”

“He’s a real talker and a big fuss-pot. He loves to sit in my lap and observe his domain. I think he thinks he owns me too!” laughs Mel. “Snaps’ son, Chip – so named because he's a chip off the old block – has learned to trust me too. He followed me home one night, and when I escorted him back he followed me home again. We were walking back and forth into the early hours of the morning. In the end, I made a bed for him in the garden and just let him stay there for the night. The next day, he was still there and he never left. He’s actually moved into the house now and we adopted him.

“That happens quite often. It’s an organic thing. So rather than forcing the taming process upon them, I let them take the next step. They let me know when they are ready. I’ve been able to rehome so many of them this way. Getting them out into foster care and eventually adopted.”

Two years from when she started, Mel has successfully desexed and rehomed many of the cats, reducing the colony from more than 100 cats, to about 13. And with all the cats Mel has rehomed, she’s made sure it is the best thing for the cat, and given the adopters plenty of advice to help settle their new pet.

Many of the remaining cats may never be tame enough to be adopted, although they have learned to trust Mel over time.

“I believe it's possible to tame any wild cat,” says Mel. “Not all of them will be lap cats, but that’s true of all cats. To varying degrees, they can all learn to live with humans. You can desex them and reduce the impact of their production. You can feed and play with them to reduce their appetite for hunting and minimise their impact on local wildlife. And the wonderful thing is, anyone who loves animals can do what I do. You don't need any special qualifications, just patience and time. We can, and should, work with them, rather than just killing them. The outcomes are better for cats, wildlife and the community.”

People in the local area are aware of Mel’s work and the majority have been overwhelmingly supportive and interested – especially when Mel explains how and why this is a far more effective way to reduce the population than killing cats.

“I don’t lie about what I do, even though I know that, technically, it’s illegal. I’ve had a couple of confrontations with ignorant people, but even the local police have been tolerant. I think the police probably have better things to do than arrest crazy cat people.

“I try to be as community conscious and responsible as possible. I pick up the rubbish in the area and keep things as tidy as I can. I’ve even put out a deliberately lit bushfire before it got out of control, and reported suspicious incidents.”

We asked Mel to describe what it feels like to make that journey, from sitting 50 metres away with her back to the colony, to being accepted by a wild cat.

“I feel honoured to be part of their community. Being nuzzled and hugged by a wild cat, and having the privilege of meeting their litter of kittens before they are weaned, is such an amazing feeling,” says Mel. “I wish everyone could know what it is to be loved by a wild cat.”

Mel is currently writing a book to promote the alternatives to cat management and encourage other animal lovers to experience the awesome journey she has taken. In the meantime, if you are inspired by Mel’s story, and want to take action for wild cats in your community, be sure to take a look at our Community Cats article.