Rosie was found abandoned at one-week old, with her sister. There was no sign of mum, so the amazing ladies at Forever Friends Animal Rescue scooped them up and put them in foster care to be hand-reared. Sadly, Rosie’s sister died within a few days, leaving her without a sibling or a mum at a very young age.

But Rosie’s wasn’t the only grieving heart in Victoria at this time. Sam had just lost her 19-year-old cat Snaily in May 2014 and knew that her other cat Rebus, who was around 15-years old with renal problems, may not have long to live.

“I was hugely attached to them both, and was completely devastated when I lost Snaily,” says Sam. “But there was no way I wanted to put Rebus through introducing another cat to the house when he was at the end of his life. He didn’t need that.”

So adopting a kitten was the last thing on Sam’s mind when she was driving to work one morning and she had a vision of two tortoiseshell and white fluffy kittens.

“I’m psychic, and often have visions come to me,” Sam explains. “And at that moment an image popped into my head of the most gorgeous pair of kittens. They looked right at me with their beautiful blue eyes. And I thought, that’s odd because I’m not looking for a new cat! But I couldn’t ignore the sense that this kitten was waiting for me, because I could see it so clearly.” 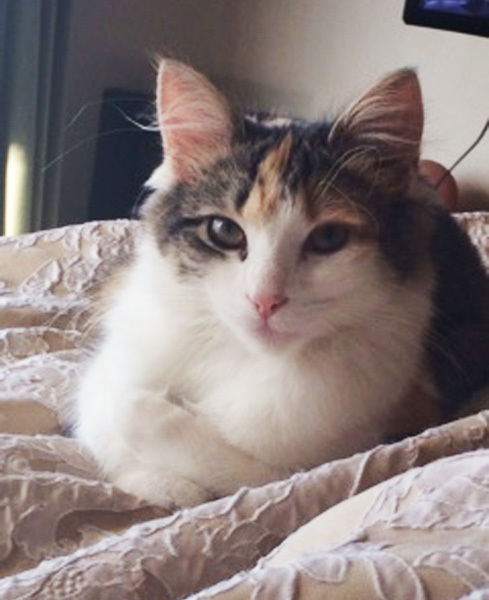 Five days later, Sam’s cat Rebus passed away at home. But Sam had little time to grieve at home, having just made plans to attend the funeral of her best friend’s father in Melbourne.

“While I was staying down there, I was lying in bed with my iPad one night, having a google, and I put in a search for ‘Kittens needing adoption in Victoria’. This brought me straight to the PetRescue website, and right there, on the second page of search results for ‘cats in Victoria’, was Rosie - one of the two kittens I had seen in my mind’s eye, five days before. So I thought, OK, there’s my new kitten!

“I emailed Forever Friends Rescue, who was caring for Rosie, and got an email back pretty quickly with the adoption enquiry form. I didn’t include any mention of my ‘vision’ on the form, but when I got a call from Forever Friends, and they asked me what had made me decide to look at Rosie, I thought, well, I’m just going to tell her the kookie truth! I said, you might think I’m crazy, and when I tell you this you might decide you don’t want to allow me to adopt a pet, but this is my story.

“Forever Friends seemed quite interested in what I had to say, and arranged for me to meet Rosie and her foster mum on my way home from Melbourne.

“Only at this point did I send the photo of Rosie to my partner Rhonda who, historically, has not been a big cat lover. And certainly not a fan of white fluffy ones! So when I sent her the photo of Rosie, I was really wasn’t expecting such a positive response - an unequivocal ‘She’s absolutely beautiful!’ Then, the next text came and it just read ‘Are you bringing her home?’ To which I replied ‘Hopefully.’

“I’d already been told that Rosie was a very independent cat who wasn’t particularly cuddly or affectionate. But I explained to Karen, Rosie’s foster carer, that I didn’t have any criteria or expectations, as long as she wasn’t a vicious cat. And when I met Rosie, she wasn’t very interested in engaging or playing with me at all. But she was adorable, and I knew she was meant to be mine!”

They all agreed to give it a few days for the foster carer, Rhonda and Sam to make a definite decision and, as soon as Rosie had been desexed, Sam travelled back to bring her home.

“While we were waiting for our new family member to join us, We’d also decided to adopt an older cat, as I always like to have more than one of each animal. We’d heard that ex-breeding cats were often looking for a good home to live out the rest of their days. So I put a call out to our local community for an ex-breeding cat - didn’t care what age, gender or breed - and was offered a two-year-old female Devon Rex who’d had two litters of kittens.”

Rhonda and Sam decided to adopt her and they picked her up and brought her home the day before Rosie was due to arrive. 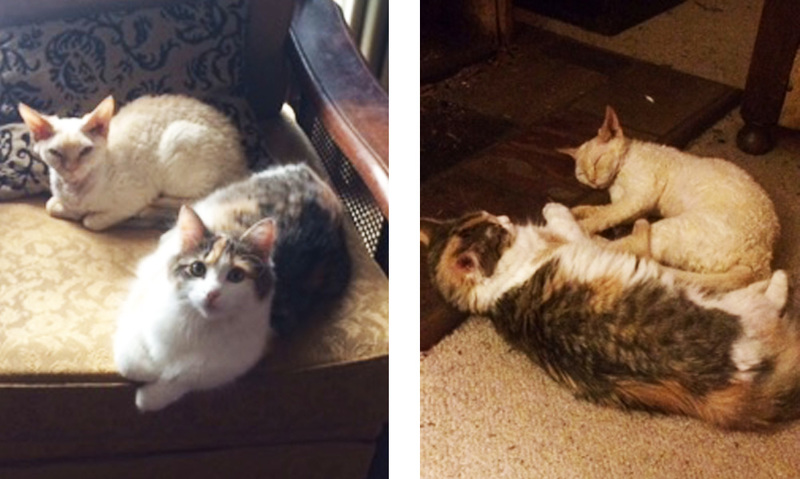 “We named her Juno, and soon discovered that she was the most terrified cat we’ve ever seen. But here’s the thing. When our mumma Juno met Rosie, she just instantly took the little kitten under her wing - literally offering her teets in an attempt to feed Rosie! It was the most beautiful thing!” says Sam. “Here was a cat who’d had her kittens taken from her, and a kitten who had lost her mother and sister at such a young age, and they just bonded instantly. Within a few nights, they were snuggled up together by the fire just like they’d always been family.

“I think this had a profound effect on both cats, as they quickly became the most friendly and affectionate felines - especially Rosie, who we renamed Safka.

“Safka soon started to be more interactive, playful and cuddly. She’s one of the most entertaining cats I’ve ever had. And even though my partner Rhonda had grown to love my old cats, I never dreamed that Safka would win her heart so completely - the two of them have the most extraordinary bond.

“But for me, Safka coming into our lives at the time she did was a huge blessing. She helped me recover from the all-consuming grief of losing my mother and both of my cats within just 12 months of each other,” says Sam. “I was going through a really tough time and, honestly, coming home to Safka was really what kept me going. I was just so incredibly sad, but Safka’s contagious sense of fun and loving cuddles brought me solace and joy.

“It’s also hugely comforting to know that, from being a lonely little orphaned kitten, Safka now has three doting mums who all love and adore her - Rhonda, Juno and me! And it’s no wonder that she made it into the PetRescue calendar, because she’s like a supermodel. She’s a really very special girl with a big personality!”

Our 2016 calendars, featuring Rosie, are available for just $2
Pick up a copy of our 2016 calendar in store at PETstock and PETstock Assist will donate your $2 to support PetRescue and help more pets like Rosie find the love and care they need. Click to find your nearest PETstock store.^

Or, you can order the calendar online^ with some goodies for your pet.*

^While stocks last. May not be available in all stores, contact your local store for details.
*Orders under $50 and 5kg include a $9 shipping fee. Free shipping is available on orders over $50 (and under 45kg).