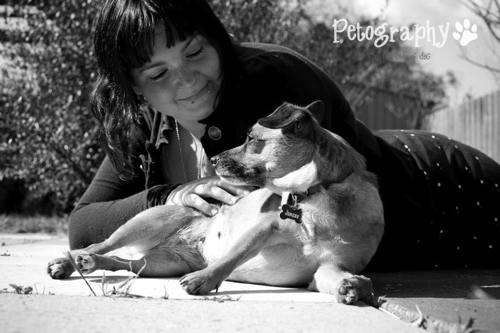 For young Perthite Claire, flying the family coop was a mixed blessing. She had her independence, but she no longer had the family pet on hand for pats, playtime and cuddles. Although Claire visited the family home practically every day, she decided to adopt a dog of my own.

"I knew that I wanted to adopt a rescue dog," said Claire. "I knew I wanted a Chihuahua. And I knew I knew I was going to name him Gizmo – a tribute to my favourite movie and the brindle Chihuahua I had as a child."

Claire spent the following few months searching the PetRescue pages for 'the one', and came across a four-month old male Chihuahua listed with SAFE Perth.

"His name was Gizmo. It was a sign!" exclaimed Claire. "On our very first meeting, after the initial assessment with SAFE, Gizmo came running straight up to me and rolled on his back for a tummy rub. I was sold!"

Keen to start a whole new life together, Claire took Gizmo home that same day. Now she had a little family of her own, independent life was good. And when tragedy struck a year later, with the passing of Claire's mother, she wasn't all alone.

"Gizmo became my rock," said Claire. "His clumsy antics and his little snores became a pleasant distraction from the pain I was feeling."

Claire and Gizmo moved around a fair bit in the years that followed her mother's passing. Where Claire had rescued him, Gizmo helped rescue her back - with Gizmo by her side, Claire was able to overcome the loss of her mother and feel the support he brought through cuddles. When they finally settled, Claire decided Gizmo deserved a close companion of his own kind. So, five years after adopting Gizmo, the PetRescue search began again.

"We went for a few play dates with a little Staffy girl named Gerry," Claire recalled. "Gizmo was really keen to play, but it became clear that we needed a dog a little older and a little smaller in size."

While the search continued, Gizmo's registration was due for renewal. Little did Claire know that a visit to Stirling Pound would bring her face-to-furry face with Gizmo's match.

"The Ranger was running late, so I decided to 'just have look' through the pound," Claire smiled. "And there she was, in the very first pen – Gizmo's slightly weightier, female, ginger twin. The resemblance was uncanny! With her little tail wagging, she came up to the cage and licked my hand."

When all the other dogs started jumping and barking with what I imagine must be mixed emotions, in their situation, the little Chihuahua withdrew and hid in the corner of her pen.

"It was at that moment I decided she was coming home with me."

Claire named her new fur child Juneau, after her favourite 'Funeral for a Friend' song, and the first meeting with her new brother Gizmo went even better than Claire could have hoped for.

"The first few nights were a little restless, with Juneau sneaking into my bed in the middle of the night, just to make sure I was still there," laughed Claire.

But once Juneau realised Claire wasn’t going anywhere, she settled right in and her cheeky personality began to reveal itself.

"She could open cupboards in the blink of an eye. She took a liking to playing with my socks and teddies and I would return home to find them, still intact, strewn across the floor after one of her mischievous moments."

"But at bedtime, she gives the best hugs and then curls up by my feet."

Being Mum to two dogs has been quite an eye opener for Claire, but she says the look on Gizmo's face each day is well worth it.

"I love our little family and wouldn’t change it for the world," says Claire.