When Katie and David recently returned from travelling the world they were keen to put down their roots, and adopting a pet was all part of the plan. What they didn’t realise was that, through adopting kittens Jiminy and Cricket, they’d made rescue history - taking PetRescue’s all-time total to 200,000 pets saved! 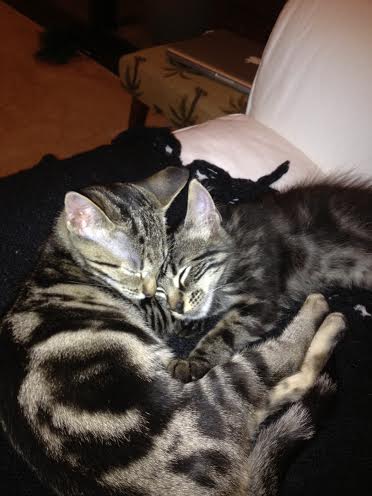 “It was some really great news, when we were told. We’re very proud” Katie says. “Jiminy and Cricket are just absolutely gorgeous. They’re these two little sisters that have settled into our home very quickly.

“I really liked the idea of saving a rescue cat from the pound and I came across PetRescue through a friend of mine. We found these two tabby cats at Starfish Animal Rescue, and that was that!

“We originally thought that Jiminy was a boy, but it turned out he was a girl. I don’t know how that happened! Apparently that is pretty common though!” Katie laughs. “After finding out, we renamed her Pippa and Cricket became Bambi as well.

“A lot of my friends go to pet shops or breeders, and I think it is really good to get the awareness out there that people should try and save rescue pets - it’s very rewarding”.

Kris Kennedy from Starfish Animal Rescue was thrilled to be a part of this milestone. “I run the rescue group all by myself, so I was completely blown away,” she said. “I’m just the one person and am so proud!”

For the team at PetRescue, reaching 200,000 pets is absolutely massive! It reflects just how far we’ve come in the last 10 years, thanks to the dedicated support of our volunteers and rescue groups.

The whole team is immensely proud to have achieved so much and it’s fantastic to see so many people embracing rescue pet adoption and saving lives.