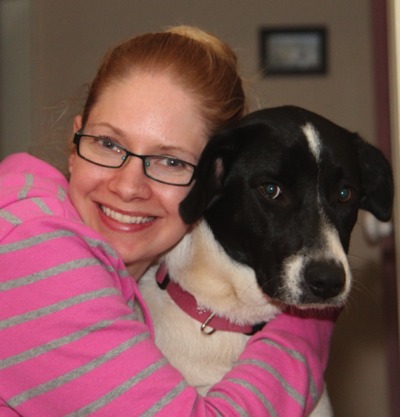 New South Wales newly-weds Cameron and Sarah already had a family of their own with two rescued feline fur kids Audrey and Ophelia. Initially, they weren’t quite sure how adding a four-and a-half-month-old Great Dane cross to the mix was going to play out. But driven by the belief that all animals deserve a chance, they took up the challenge with gusto.

“Having rescued Audrey via PetRescue, we jumped straight to their website when we’d made up our minds to adopt a dog and kept an eye on the new profile updates until the right dog came up,” said Cameron.

When the couple clapped eyes on Daisy’s profile, they immediately contacted Best Friends Pet Rescue in Wagga Wagga, only to find that they were not the only ones interested and her adoption had been put on hold due to a bout of ringworm.

“Truth be told, after returning home from a trip to London a few weeks later, we had started to let go of the idea of adopting the puppy,” Cameron admitted.

But when they received news that Daisy was ready to go to her forever home, all thoughts of the disruption a puppy might bring to their lives evaporated as they scooted off to pick up their new best friend.

“A mix of excitement, doubt and fear came out in a number of conversations in the hours leading up to meeting Daisy. But when the vehicle doors opened and we saw Daisy sitting quietly, all such thoughts disappeared from our minds.

“Big brown pleading eyes looked up at us as this black and white mass of long legs and giant paws climbed out onto the asphalt,” said Cameron.

Planning their new life together, the couple started by choosing a more fitting name.

“All of our pets have Shakespearian names, but we also worked on the assumption that she was familiar with her given name, Daisy,” explained Sarah “As we ran through the list of possibilities, Desdemona or Desie, after one of Shakespeare’s nicest female characters, seemed appropriate.”

Keen to address the bigger issue of obedience training and build her confidence in handling a large and rapidly-growing dog, Sarah enrolled Desie at puppy pre-school.

“Since our first lesson, I’ve been doing at least five minutes of training a day and she’s already responding really well. I guess this is how we get the dog we deserve, just reinforcing and slowly building on desirable behaviours,” added Sarah. “Each day, I’m feeling even more certain that we have a good natured, lovable and happy puppy on our hands.” 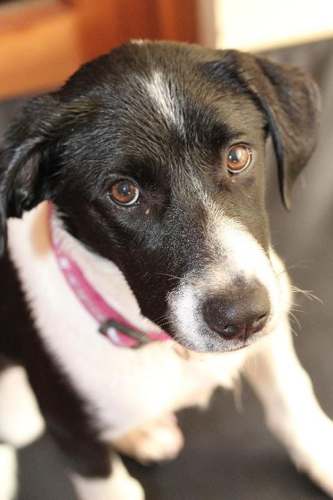