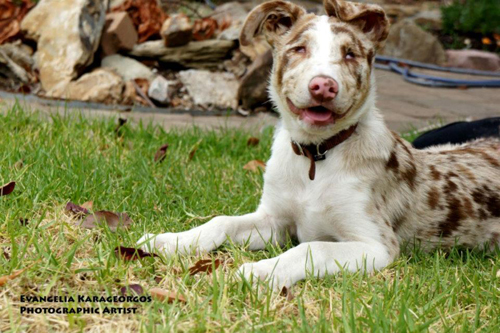 Heather at YP Puppy Rescue was used to working her magic to find forever homes for pups in need, but Wizard the cute and playful Koolie (or Wiz-Kid, as he’s affectionately known) was going to be a challenge. Wiz was born with no sight and will be blind for life.

“Many people wanted Wiz, but for all the wrong reasons,” said Heather. “The idea of saving a blind puppy appealed to many kind hearts, but the reality of training and ensuring Wiz was kept safe presented a problem too great for many to cope with.”

Tash from PetRescue spotted his profile and offered her assistance to source a professional photographer in Adelaide and capture Wiz’s good looks and cheeky personality. The team of volunteer writers at PetRescue also went to work on his online profile and a feature in South Australia’s Sunday Mail too.

By that point, Wiz was almost six months old and full of confidence and character. With genes that gave him brains as well as good looks, he wasn’t letting his disability slow him down in his quest to live life to the full and learn. He was now toilet trained, he could sit and he responded well when called. He was great with kids, dogs and just about anything that came his way.

“He was a clown too, and everyone who met him loved him,” Heather recalled.

Due to the overwhelming response from the Sunday Mail feature, Heather had to remove Wiz’s profile from PetRescue. Then, bingo! From that photograph, kindly taken by Evangelia Karageorgos, Wiz found the best home he and Heather could have wished for.

Wiz now shares daily runs in the park with his two adopted sisters, a rescued Koolie and Greyhound.

“He spends most of the day wrestling with his Koolie sister Zebi and sneaking the occasional nap in the Greyhound’s massive bed between playtimes,” smiled Heather. “He is adored and cherished by his new family, and is there for the rest of his life. Wizard is home.”