The cat came back: Bronson returns after 6 years missing 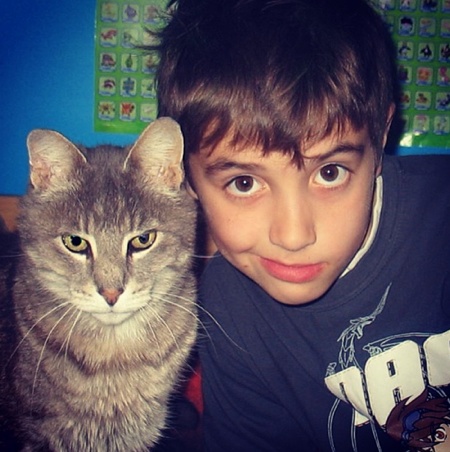 Bronson, the tabby with no tail, has one of the most extraordinary tales to tell. He went missing after his owner Liz moved from Cranbourne to be closer to her elderly parents in Mulgrave. One night, Bronson shot out of the front door of her new unit and, despite her best search efforts, she never found him.

“I was so upset. I kept a photo of Bronson in my lounge room for six years after he’d gone missing. Then, just two weeks after I finally took the photo down and put it away, I got a phone call from the Animal Protection Society saying that they had a cat microchipped in my name,” recalls Liz. “I said, I didn’t have any cats microchipped, but they proceeded to described the cat. It was Bronson! I couldn’t believe it.”

Bronson had been microchipped by the rescue group when she adopted him. Fortunately, Liz’s mobile phone number had not changed, so the Animal Protection Society was able to reunite the long-lost cat with his owner.

“I was so excited, I barely slept that night and headed out the next day to get the council fees paid so I could pick him up,” says Liz. “It was funny, when I called his name he looked up at me as if to say ‘I know that voice!’ I patted him for a while, then took him home to meet his new family.”

During Bronson’s six-year absence, Liz had adopted some new fur babies to fill the void – a blind pug named Milo, Molly the Chihuahua and a cat called Tilly. Quite a house-full, including Liz’s partner Rob and his son Anthony, but Bronson settled in without much fuss.

“I kept him in my bedroom until he settled in. But when I went back half an hour later he was nowhere to be seen. I finally found him asleep in my walk-in-robe, behind a chest of drawers. He came out eventually, when he was hungry,” Liz smiles.

He still has the stern Charles Bronson eyes and attitude that were the inspiration for his name, and he’s still the best mouse catcher Liz has ever had. But at 13 years, he likes to take life a little slower these days.

“Bronson jumps up on the dining room table to get away from the dogs and sits there watching us eating our dinner. He’ll even try to pinch a bit of meat or chicken off our dinner plate, if you’re not extra vigilant,” laughs Liz. “He’ll also take off with any item of clothing you leave lying around the house, dragging it onto his bed to make a nice snuggly nest with it.”

Liz admits that she spoils him with lots of cuddles and chin scratches, but she’s just over the moon to have him back and keen to make up for lost time.