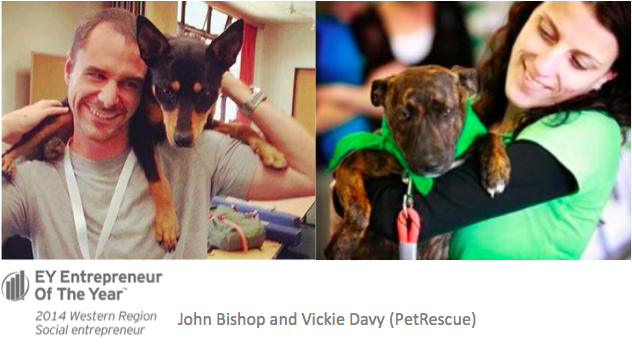 PetRescue are proud to announce that two of our executive directors, John Bishop and Vickie Davy, have been recognised in the 2014 EY Entrepreneur of the Year Program, receiving the Social Entrepreneur Award for the Western Region of Australia. The award is presented to entrepreneurs who are primarily responsible for directing the activities and longer-term strategy of a social enterprise.

Billed as the world’s most prestigious business award, winning an EY Entrepreneur of the Year award extends an already stellar year of achievements for the PetRescue team, after John Bishop was the recipient of three 40under40 Awards in Western Australia, including a City of Perth Strategic Alliance Award and the People’s Choice Award.

In receiving this regional accolade, John and Vickie now advance to the national level, where they will compete against other nominees from the same category. Past winners of the Australian EY Entrepreneur of the Year include Andrew Bassat of SEEK, Michael Malone of iiNet and Greg Roebuck of Carsales.com.

2014 is PetRescue’s 10th Anniversary, and in March this year, the team hit another significant milestone; 200,000 pets rehomed. The organisation now supports a network of over 700 rescue groups and shelters across Australia, and PetRescue.com.au regularly helps rehome 5,500 disadvantaged pets every month.