The life-saving legacy of a Digger's rescue dog

The life-saving legacy of a Digger's rescue dog

PetRescue pup Roxy had a very important mission on Anzac Day 2016. She walked alongside veteran Scott Jackman on his first march since serving in East Timor and Afghanistan.

Having been medically discharged with debilitating back and neck injuries, major depression and post-traumatic stress disorder (PTSD), Scott took this huge step on ANZAC Day, thanks to the love and support that only a furry, four-legged mate can give.

“I never picked Roxy, she picked me. She’s beautiful,” Scott said, describing the first time he met with the PetRescue pup who is now training to become his service dog.

“Service dogs become your best mate. They’re the reason you can get up and go out. They take away your problems and fears, and give you a sense of responsibility.

“If I’m feeling sad, Roxy will come and sit on my lap and kiss my ear. It distracts me, and then I feel happy. If she senses that I’m getting angry, frustrated or anxious, she’ll paw at me and distract me. They just know.”

But Roxy isn’t his only savior. Scott credits his first service dog Whiskey with saving his life.

After being discharged from Afghanistan with severe injuries and PTSD in 2013, Scott spent the next 10 months drinking and abusing prescription medication, until service dog Whiskey came into his life.

With Whiskey by his side, Scott discovered that all suicidal thoughts gave way to a sense of calm and happiness. He could rest easy knowing that Whiskey always had his back. And the responsibility that comes with caring for a dog gave Scott a reason to get up in the morning.

But after only 12 months together, tragedy struck. Whiskey was diagnosed with an aggressive and incurable cancer and Scott had to make a very hard decision.

“He was due to be put to sleep that afternoon, but he died in my arms before the appointment. I was bawling like a baby. It was like losing a best friend,” says Scott.

Inspired by his loyal lost companion, Scott co-founded Whiskey’s Wish in November 2014. The Brisbane-based not-for-profit organisation focuses on preparing dogs for a life of highly specialised service for veterans and first responders, with an emphasis on early intervention and ongoing support. 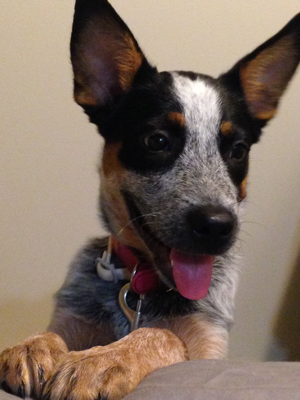 Scott got in touch with PetRescue to enlist help with his life-changing mission. He was put in touch with local group, Best Friends Rescue QLD, who gave Scott a supply of lifesaving recruits - including Roxy and her brother Joey who were part of an unwanted litter of pups.

“It’s a great partnership,” says Scott. “We help save these pups from the pound system, where 25% of dogs are killed due to homelessness. And the pups help save and improve the lives of Diggers who fought for Australia.

“We currently have a waiting list for our service dogs, which is a clear indicator of the important work these dogs do every day,” says Scott. “Service dogs are highly specialised and trained to suit their individual owner. So a dog might be pulling a wheelchair, alerting and protecting a person who is having a seizure, reminding a person with mental illness to take prescribed medications, or calming a person with PTSD during an anxiety attack.”

Little Roxy has got some big paw prints to fill in carrying on the legacy of Whiskey. And while she’s taking puppy steps on her mission to become a fully-trained service dog, what she already does for Scott each day is proof that a rescue dog is a precious life that deserves a second chance.

If you are a rescue group, and would like to support the program by supplying rescue dogs for training, please contact PetRescue via info@petrescue.org.au

If you are a veteran who would like to find out more about the program please visit whiskeyswish.org.au