Matt from Melbourne would never have thought he was able to look after a cat, but since Jackson the foster cat walked into his life and onto his sofa, he’s not ashamed to admit he has something special going on with his particular moggy.

“The concept of fostering to give a rescue cat a second chance in life really appealed to me – especially as we had learned that shelters often only keep older cats for a couple of weeks before they are euthanised. But I have to be honest; the idea of adoption scared the bejesus out of me – too much responsibility for my liking!”

So how did this independent guy, with a busy life as an HR professional and regular DJ, start off with the good intention of giving an old cat a safe stop-gap but end up in a long-term relationship? Well, it would seem that Matt and Jackson were made for each other.

“Jackson’s a lot like me. He’s very independent and doesn’t need to be watched or fussed over 24/7. He’s his own cat, and I respect that,” laughed Matt. “When Jackson first arrived at the flat, we left him alone to settle in and that seemed to suit him just fine.”

Giving Jackson space and time to adjust was obviously just what he needed, and Matt was surprised to find his feline guest sleeping at the bottom of the bed on the first night. However, that mutual respect was about to develop into a bond that took everyone by surprise, especially Matt.

“About a week after he arrived, I was watching a DVD and he came into the lounge, hopped up onto the sofa, climbed onto my chest, put his front paws on my shoulders and laid there for about 10 minutes purring. It was bizarre!” said Matt. “Then he just jumped down and went about his own business again. That became a regular thing and, depending on how he’s feeling, I usually get two or three of those moments with him a day – more if I’ve been away for a day or two.”

After a few weeks, Jackson was adopted by a retired couple and it was only then that Matt realised how attached he’d become and how much of a mistake he’d made by letting him go.

“After he left on the Sunday, I was absolutely miserable,” Matt admitted. “Then, two days later, we got a call to say it wasn’t working out and would we come and get him? I was so lucky that I got a second chance with Jackson – I was over the moon!”

Every time the couple that took Jackson approached him, he hissed and clawed at them. But once he was back, Jackson went straight to his favourite spot on the bed as if to say “I’m home again.”

“When I entered the room and sat on the bed, Jackson hopped up onto my chest and started purring,” recalled Matt. “People have said that we were just meant to be together.”

Matt and Jackson have settled into bachelor life perfectly, and on reflection, Matt now realises that he has got so much more out of the relationship than an occasional chest warmer.

“I think it’s fair to say that having Jackson around has taught me a lot. He’s taught be to be more tolerant and sympathetic,” explained Matt. “For example, when I first got him home, I didn’t realise he needed a scratching post, and I learned to be very understanding and accepting when he decided to use my brown leather sofa as his play station. I was even able to see the funny side!

“These days I tend to worry a lot less about myself and my belongings and think more about what Jackson needs – which, in turn, has made me a better, more relaxed person to be around,” said Matt.

He’ll even admit that Jackson’s been a positive influence on his health and wellbeing. These days, instead of staying out late for an extra pint or two at the pub, Matt prefers to head home to make sure Jackson’s OK.

“Adopting Jackson is one of the best things I’ve ever done,” Matt smiled. “I’d say, even if you can keep a cat safe for a few weeks and give them the time they need to find the right family, that’s a good thing. Not only will you save a life, the people who adopt the animal will benefit as well. And if you end up adopting your foster, then you know it was just meant to be.” 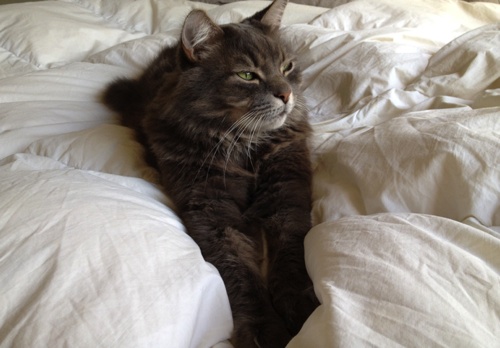 You can help us keep saving pets too, by making a donation to our rehoming programs. It costs just $10 to match one of our rescue pets with their new family.
Advertisement