A paw-some addition to a nursing home

“She makes the lodge feel like a home,” is how 71-year-old Joan described the joy she felt when welcoming shy cat, Missy, to the nursing home where her husband, Digby, is a resident.

After noticing how a stray cat that once appeared at the nursing home brought some sunshine to the residents, Joan thought it would be a great idea to get a friendly and loving cat as a permanent resident at the lodge.

At the suggestion of a staff member, Joan reached out to Freedom from the rescue group SAFE Avon Valley Rescue, which was home to more than 70 cats. It was love at first sight when Freedom introduced Joan to a beautiful 18-month-old tortoiseshell named Missy. As Joan fondly recalled, “our eyes met, and I just realised we liked each other.” 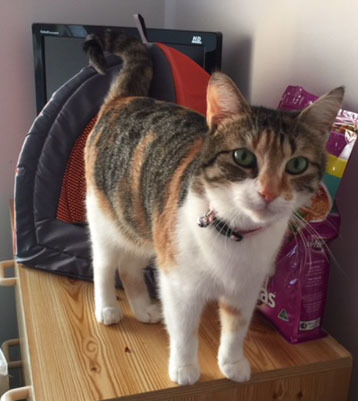 Missy was initially set up in a dedicated shelter in the enclosed courtyard of the nursing home, but a couple of days later she was scratching at the door, wanting to be let inside.

And who could resist such a charming sweetheart? Being a keen explorer, it didn’t take long for Missy to start strolling around seeking a pat or two from the residents. And now, she often ends up sleeping on their beds, rather than her own!

Joan said the elderly residents of the lodge - many of whom have dementia - just love spending time with animals, and Missy’s warm and cuddle-bearing presence really brightens up their day.

“They love Missy. They smile and point at her as she strolls around. She is a pleasure for everyone,” said Joan.

“It is so satisfying to see the joy she brings, and the residents and staff are all more relaxed with Missy around. They love to pat her, and Missy loves to be patted.”

This calming cat now has a full-time job spreading cheer to the residents and the staff, though the word from Joan is that her husband Digby is definitely one of Missy’s favourites!

Cats make amazing companions for young, old, and everyone in between. So if you need the love and companionship a cat can bring (or know someone who does), head to PetRescue.com.au to search for adoptable cats in your local area.