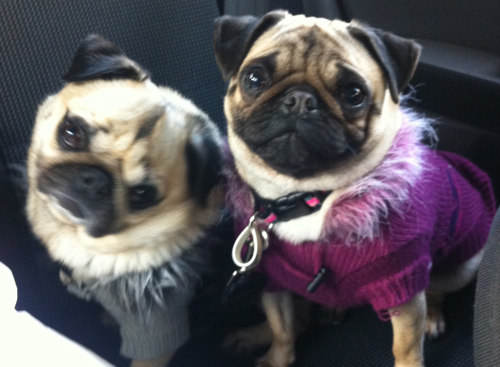 After doing a fair bit of breed research to find a match for her lifestyle and personality, it became pretty clear to Krystal that a pug would make a perfect pooch match. And, for her, adoption was the only option.

"A friend made it her mission to play pet matchmaker, and would regularly send me links to the PetRescue pages," Krystal recalled. "When she sent me the link to Gizmo's profile, he just looked so cuddly, with the cutest pleading expression. I was in love!"

He was listed with Pug Rescue, and after a phone interview, house inspection and a few meet and greet sessions with her chosen boy, Gizmo was able to go to his new home just in time for Christmas.

“With some gentle encouragement, I managed to heal some of his anxieties. But when a vet advised medicating Gizmo to calm him, I was keen to find out what our alternatives were and, to my surprise, the vet suggested a younger, placid, female pug would be the perfect tonic,” said Krystal.

So the search began, and Krystal reached out to Pug Rescue once more to find Gizmo’s match.

“As luck would have it, Jo at Pug Rescue had a younger, female pug with a beautiful, docile temperament in need of a new home and so I got to meet Marli,” Krystal smiled. “All she wanted to do was love and be loved. She had an adorable personality, but it was with trepidation that I introduced Gizmo to Marli. I was unsure how he would react.”

It wasn’t love at first sight. For almost two weeks Gizmo solidly ignored Marli, even snapping at her if she got too close. Marli, however, would never give up.

“She would try and snuggle up to him, sneaking an inch at a time, while he steadfastly ignored her,” Krystal recalled. “She followed him around the house, stared at him lovingly, and bravely tried to share his food bowl.”

To help Marli’s quest, Krystal persevered, hoping that eventually Gizmo would warm to Marli and let his guard down. Then one day, after almost three weeks, Krystal heard a growling noise coming from the lounge room and crept in to see what was going on.

“They were playing!” exclaimed Krystal. “Gizmo was chasing Marli, and when he caught her she would lie on her back and wrestle with him. I’d never seen Gizmo behave like this with other dogs before. Was this our breakthrough?”

Indeed it was. From here, it was onwards and upwards. Gizmo became more relaxed around strangers and other dogs, and when Marli barked, Gizmo barked – a problem that Krystal felt blessed to have after over two years of silence.

“Now, nearly six months later, I’m so happy I chose to adopt again,” said Krystal. “Not only have I had the opportunity to give a home to two surrendered Pugs, I can genuinely say that they have improved the quality of my life and each other’s.”