A cat walks in to bar… 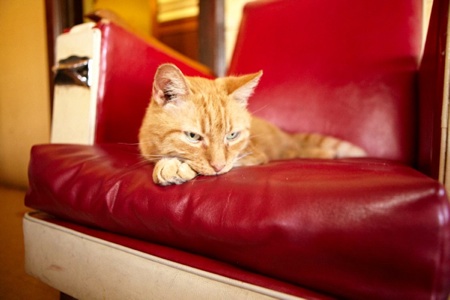 Puss didn’t intentionally walk into life as a pub cat, it was just fate and Phil the publican that brought him from a quiet life as a tenant in an investment property to being the star attraction at a bar in South Melbourne.

He’d been a stray cat taken in by Phil’s tenants, but the buyers of the investment property already had a dog and flatly refused to adopt Puss. And so his bar life began when Phil took him on a car ride from Middle Park to The Builder’s Arms in Fitzroy.

“Puss never really settled into the Builders Arms, which was his home for about two years,” Phil recalled. He lived upstairs, roamed the rooftops of Gertrude Street and rarely ventured down to the bar. It was only when we sold the Builders and bought the Railway Hotel in 2000 that Puss became a true pub cat.”

At first, Puss was a bit timid when he made an appearance downstairs. But as the years went on, he became far more confident and accustomed to the life of a pub cat. He lived at the Railway for 12 years and made friends with all the staff who came and went, not to mention many of the customers.

“In fact, Puss was such an important part of the team that often staff would commence a shift by signing on and then going straight to Puss, as it was often a higher priority to ‘sign on’ with him rather than work!” laughed Phil.

Even the pub maintenance and delivery personnel who dropped in were familiar with the pub’s famous feline. “Many of them were accosted by Puss on arrival and lead up the stairs by a procession of meowing to a space known as ‘Puss' Kitchen’. It never took long for the delivery drivers to spot Puss' food supply and work out what all the commotion was about!” said Phil.

Puss even made an appearance on Channel 10 news, and was the topic of many online reviews exclaiming "saw the cat!", "the cat walked past" or "the cat is awesome".

During the winter months, Puss controlled the fireplace. The chairs in the front of the open fire seemed to always be taken by Puss. And if he happened to be walking around when a punter settled into one of the fireside chairs, Puss wouldn’t hesitate to jump straight up on their laps – much to the surprise of many punters.

He also enjoyed sitting on a bar stool, next to staff or customers and would regularly join guests dining in the restaurant. “On one occasion, there was a group of bucks celebrating and Puss seemed so engrossed in their conversation that he took a chair at their table to listen in,” recalled Phil.

Puss got to know our opening times and developed a sense for which days and nights we were busy. However, he got the fright of his life when he walked into the bar expecting the bar to be closed on a Monday afternoon, only to find St Kilda Football club having their private Mad Monday celebrations.

“Confronted with 40 big burly football players all running amuck, his little legs couldn't run fast enough back upstairs,” Phil laughed. “But if a dog happened to be in the courtyard, Puss would stare down the intruding canine. He even took on a few dogs over the years. Puss knew who was boss in his pub!”

As puss got older, he got a bit fussier about going outside when it was a bit too hot, wet or cold. It took a little while for Phil to realise that Puss was using the nice warm coals on the fire as a toilet box.

“Whilst not ideal, it was okay in winter, as we always lit the fire before patrons entered. But it was a problem during the summer months when the fire wasn’t used. Fortunately, whenever a member of staff saw him walking towards the fireplace when we were open, they were very quick to grab Puss and take him outside,” said Phil.

After 17 years of loyal service as a pub cat, old age caught up with Puss. He’s now left the Railway and is resting comfortably under the big oak tree in the beer garden, where he can continue to watch the comings and goings of the pub!

Loved reading about Puss? We share Happy Tails in every monthly edition of our newsletter. So why not subscribe.